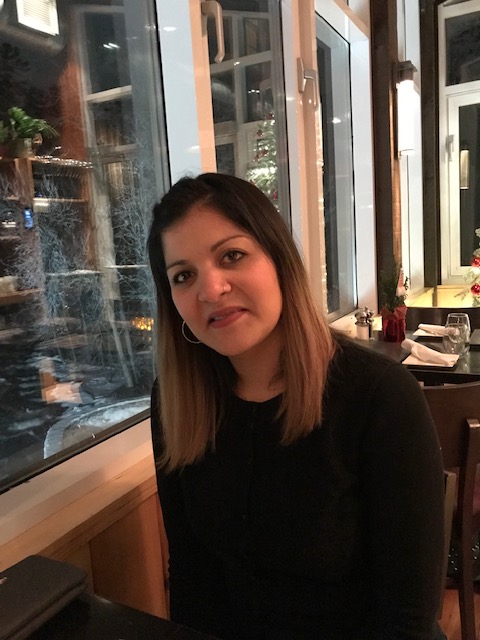 The chips are laid out, the cans of pop are open. Ashlee is scrolling on the tv to find something that jumps out at her. We will be settling in for hours; just as we like it. I love these weekends, and my 15 year old anxious self needs these weekends. But this particular weekend I’m on my period and I’m constantly squirming because I’m fearful of my pad shifting in the wrong direction. I know Ashlee won’t care if I leak through my pants but I care. I don’t want that today. Do I dare put in a tampon just to be done with the shifting, knowing it’s gonna hurt? No, it’s not worth it. I’ll change my pad in an hour anyways and see what the status is. Until then I will just make sure this blanket is heavy enough to push down on my cramps for the next few hours. Thankfully Ashlee has a heating pad for me and all the PMS’ing treats I could ask for.

Those were the blissful moments of my exhausting periods. But struggling through intense period pain and heavy bleeding often meant lack of focus in school, missing a few days from work, making excuses not to go anywhere or do anything because I was crippled in the fetal position. My periods were also sporadic: a few days on, stop, 11 days on again. I was barely managing. Being 15 was challenging at the best of times but I didn’t need this. One day during class, I went to the bathroom to change my pad. I was changing them every 20 minutes and I knew my teacher was on to me. I sat there, waiting for it all to just stop. But I eventually got up, walked back to class, and fainted. Mom came to get me from school and took me to the hospital. I didn’t know what they would be able to do for me, but I trusted mom would be my voice as she always is when I’m low (even to this day). I was given some fluids to bring me back to life along with pain meds. And while I waited for a doctor to come see me, the nurse by my side said “I bet labor will be a breeze for you”. As I was swiftly carted away for more tests, the doctor uttered the word ‘endometriosis’.

I was 15 at the time, and put on birth control to help with the pain and to regulate my cycle. 15 is not a good time to put a hormonally imbalanced child on birth control. I popped that first pill and continued to pop for another 12 years. And then I was suddenly 27 and wanting to have a child. I tried. I tried and I tried but we just could not get pregnant. At that point, about a year into the fertility journey, I spoke to my doctor. He assured me that after a few more months of failed pregnancies he could refer me to a fertility specialist. When I finally saw the specialist he did his routine tests, unblocked a tube with what he called ‘champagne’, and told me I had low egg count. But all of this together still did not add up to why I could not at least get pregnant. The next logical step was to explore endometriosis – the first time in 15 years I’d heard this word again – through surgery. At the age of 29 he was able to officially diagnose me with stage III endometriosis, and had ablated the lesions off my ovaries, bladder and colon. But ablation simply means shaving the disease down. I was given 3 months to conceive – which we did not – and then it all started growing back again.

For the next 6 years I dealt with menstrual pain that eventually turned into chronic pain. I was unable to do anything with success. I lived on my own at the time, after battling a divorce, and had moved across the country from Ottawa (to LA and then) to Vancouver. By the time I arrived in Vancouver the pain had ‘spread’ from my pelvic area to what felt like my ribs. A referral went into the BC Women’s Centre for Pelvic Pain and Endometriosis. It took a while to see a doctor there but I was eventually able to have a very thorough examination done and she requested I start with a progestin-only pill to see if it stopped some of the pain. More pills! And it didn’t work. I felt like I was unable to breath, constantly clutching my ribs. We agreed: Surgery. But this time she performed an excision surgery to remove the lesions from its root. This would hopefully get rid of the endometriosis or at least buy me several years. I woke up from that surgery and she told me she removed endometriosis from my ovary – with an ovarian suspension – my bladder, colon, and yes, my diaphragm. The recovery was intense, and after about a week she had to remove a string that was keeping my left ovary suspended in the air. And it bought me time. It bought me… a few months. And then something turned again. The periods were excruciating. The pain was intense. What happened? Surely one of the best surgeons in the world would perform a perfect surgery to remove my endometriosis. But that’s the thing with endometriosis. It is invisible as we say in the community.

We didn’t know any of this at the time but as I got in to see one of the leading specialists in Ottawa upon my move back to the city, adhesions were forming on the surgical sites. Without being able to see it, or go back in without causing more harm, we had to navigate our way through the pain using a variety of medications. I was first put on oral progestin which in theory should have reduced the estrogen fuelling the disease. It didn’t work. I then had the Mirena IUD inserted into my uterus to see whether localized progestin would be more productive. The little arm on the IUD began poking into my side so not only did it NOT work, but it was causing an irritating pain in my side, literally. Finally, I was put on Orilissa, a GnRH antagonist which is supposed to slow the production of sex hormones which could also be feeding the endometriosis. I hate the thought of these drugs but I wasn’t ready for another surgery and this was just to buy me some time while potentially giving me some relief. Sadly, not even the fine print warned me about the suicidal thoughts that a small percentage of people experience with this medication. I have never been suicidal before, nor was I about to act on any of these thoughts, but they were dark! I mean, dark! I stopped the medication immediately and then we were full swing surgery mode. And… then the pandemic hit and surgeries – especially gynaecological ones – were put on the back burner. I waited 8 long and grueling months until I finally said I can’t do this anymore. What felt like endometriosis on my diaphragm was dreadfully hard to manage at this point. I received my surgery date for October 9, 2020. When I woke up from that surgery I had pain and discomfort like you would not believe. Luckily I was able to go home the same night so I could endure a morphine-hazed sleep in the comfort of my own bed, next to my fiance.

Two days later the surgeon called to let me know that while we are still waiting on pathology (which most came back negative, thank goodness), there were some – but not a lot of – unusual spots on my diaphragm, a cyst on my right ovary, and he had to spend hours removing my bowel and left ovary from my abdominal wall which were fused by adhesions. To be fair the state of the endometriosis was not nearly as bad as I had anticipated but the overall state of my insides were scary. Maybe not scary to a surgeon who does this day in and day out, but scary for me. That level of messed-up-ness could not be seen on any scans, could not be helped with any amount of pain meds, and was literally something I second guessed for months and months. Now, all I can do is hope that with the determination I have to keep moving, I can prevent as many adhesions as I can. With the diet changes and the yoga, and the vitamins and the epsom salt baths and the meditation and the … hopes and dreams of living a normal life again…maybe I can buy myself a few more years until I need another surgery again. Who knows? It’s invisible after all.